The first inhabitants along the banks of the Wallkill or Paltz River in the vicinity of present day Walden were Native Americans who followed the receding glacier into the river valley. The Wallkill River Valley was a transportation and trading route for early inhabitants as well as a place for settlements.

Europeans began to arrive within the Wallkill River Valley as early as the 1650’s.

By the early 1700’s, Europeans began to establish homesteads and permanent settlements along the Wallkill. “On the east bank of the Wallkill, the first settlement was established in and around the high falls of the Wallkill. Henry Wileman received a grant of 3,000 acres of land upon which Wileman Town was built after 1713.” (Source: Marc Newman: Images of America Walden & Maybrook, Arcadia Publishing, 2002.) 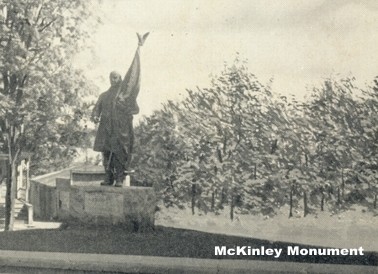 Thereafter, maps were prepared, for a planned community of industrial, business and residential sites called the Village of Walden. “By the 1820’s, Jacob T. Walden’s mill was creating cotton and woolen cloth for New York consumers through the power of the mighty Wallkill.” (Source: Marc Newman: Images of America Walden & Maybrook, Arcadia Publishing 2002.)

By the 1840’s Walden was a major woolen manufacturing center in Orange County. The focus of production shifted from textiles to cutlery when in 1856 the New York Knife Company moved to the idle cotton factory. Walden would see the establishment of two more knife factories with Walden Knife Company in the 1870’s and Schrade Cutlery in 1904.

Soon thereafter, Walden would earn its title as the “Little Sheffield” as it became the cutlery capital of the United States. Cutlery remained a major industry until the 1950’s when Schrade cutlery was relocated to Ellenville. Vestiges of the knife industry remain, from the dam at high falls to the McKinley Statue. The Village and historical society are hoping to create a Knife Museum to preserve the Village’s rich history and its contributions to the Nation. In the 1930’s and 1950’s Walden was also a center for the garment industry with sewing facilities on the upper floors of the Walker Building, the Wooster Building, and other sites. Women comprised 90% of the garment workforce with workspace on the upper floors of buildings such as the Walker Building.

Walden is located within the Town of Montgomery, in Orange County. In 1855, Walden was incorporated as a Village. During the 1870 period of time, rail service also came to Walden, providing both passenger service for residents and access to markets for its manufacturing industries. By the early 1900’s, Walden came into its own as a center for manufacturing, commerce, banking and retailing.

The early 1900’s were a period of prosperity for the Village. During this time, the dense residential development pattern of single family homes on small lots, coupled with residences above-the-store in Downtown became established. Public buildings such as Municipal Hall were constructed along with the Soldiers Monument, Firemen & McKinley Monument’s and Volunteer Memorial. These architectural and cultural resources contribute to the vitality of Walden to the present day. 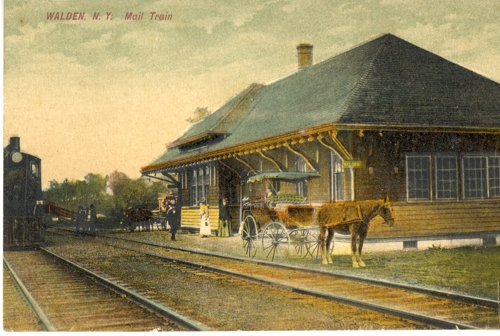 Throughout the 1940’s, Walden continued on its path as a center for industry and commerce, serving not only the surrounding agricultural areas, but the greater region and national markets as well. By the 1950’s, Walden’s dominance as an industrial center began to decline as a result of competition from other markets and changes in cutlery industry. By the 1950’s, the Village’s last cutlery producer, Schrade Cutlery, moved its facility to Ellenville, New York.

Even with these changes, the Village remained a center for manufacturing with such companies as Package Lighting, Nelco, Interstate Packaging Corp., AMPAC, and Pierce Industries. These industries relied upon Walden’s skilled workforce and access to markets using the rail line and proximity to major transportation corridors such as Routes 52 and Route 208.

The ease of mobility wrought by the rise of the automobile and the construction of the New York State Thruway and more recently I-84 meant that the Village had to compete with new and emerging automobile oriented retail centers in the region. As a result, during the 1980’s and 1990’s, the Village saw an increase in the vacancy rate of Downtown buildings and a loss in market share.

However, the Village has adapted well to these regional shifts in consumer spending patterns and has continued to reinvent itself. Walden remains a center for banking with the home offices of Walden Savings and Walden Federal Savings Bank. Both banks recently expanded their operations Downtown, helping to draw customers and reduce building vacancies. In terms of commerce, long-established retailers such as Sohns Appliances, Millspaugh Furniture, Roosa Jewelers, and the Thruway Market continue to serve the surrounding region. Millspaugh is enlarging its present Main Street store by expanding into a vacant building adjacent to its current Main Street location.

Walden looks much as it did 100 years ago, with an historic central business district, surrounded by dense neighborhoods, nestled along the Wallkill River. The Village is well defined as one travels into the surrounding farmlands.