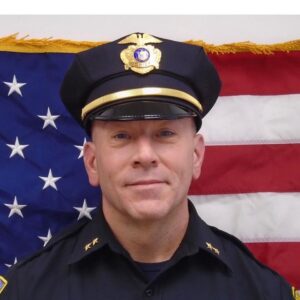 Our village is approximately four square miles of mostly dense populated neighborhoods which we patrol with six marked patrol vehicles, two Raleigh F500 and two Cannondale Police bicycles.  There is a foot-patrol that walks, or a bike-patrol that rides the Main Street area from 6:00PM until Midnight.

The Village of Walden is located within the Town of Montgomery, County of Orange, approximately 60 miles North of New York City.

I am incredibly grateful for this wonderful opportunity to continue to provide a high level of professionalism and integrity to the citizens of the Village of Walden as well as to our surrounding communities.

One of my top priorities as Police Chief, is to continue the excellent work that we have accomplished over the past several years under Chief Holmes and our dedicated officers. We currently have 2 full-time Sergeants, 9 full-time patrol officers and 13part time patrol officers. We have 3 full time police dispatchers and 9 part time police dispatchers. Our officers and staff in the Village of Walden are dedicated to serving the citizens of the Village and to enhancing the quality of life in the Village by working in partnership with the community to enforce the law, preserve peace, protect the people, reduce fear, and maintain order. As such, we will continue to concentrate on building a stronger partnership with our community members. Our number one priority is always the safety and well being of our citizens.

In addition, as Chief my ultimate goal is to obtain accreditation status for the Agency. I will be working on the Governor’s Executive Order #203. I would also like to bring back additional foot patrols and bike patrols. I truly believe that having our officers out and about within the Village helps us to better connect with our business owners, citizens and guests. I think people feel safer and more secure when they see regular patrols throughout the Village, especially once the warmer weather arrives and many residents both young and old are enjoying all that the Village of Walden has to offer. I think this also instills a sense of community and partnership between our citizens and our Police department.

Again, I am incredibly proud to take over as Chief of Police for the Village of Walden. I as well as our officers are committed to working diligently with the utmost professionalism and fairness to all residents in the Village and our neighboring communities.

History of the PD

Calls for Service by Month